We were happy to have the opportunity to enter four lots into the first Ontario Limousin Eastern Select Sale.  The overall quality of breeding stock in this sale was outstanding.
Thank you to everyone who supported our program and purchased the following lots. 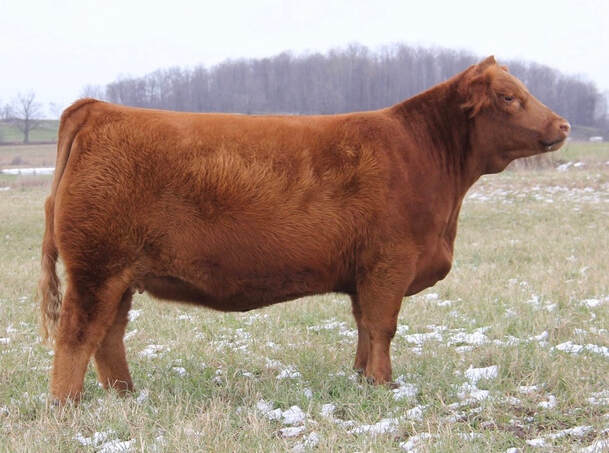 After Hours Hello Dolly REW140H has found herself a new home in the United States!
Thank you to Drew Wisley of Locust Lane Limousin, NY for attending the 2021 OLA Eastern Showcase
​and purchasing  Lot #4 , the high selling bred heifer. 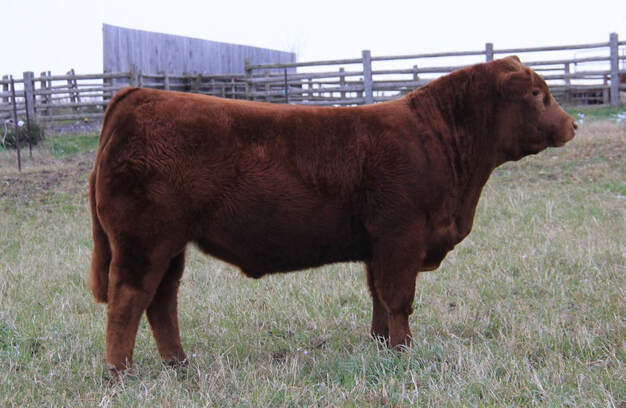 We were very excited to come home with 4 banners from the 50th National Limousin Show in Toronto this year! 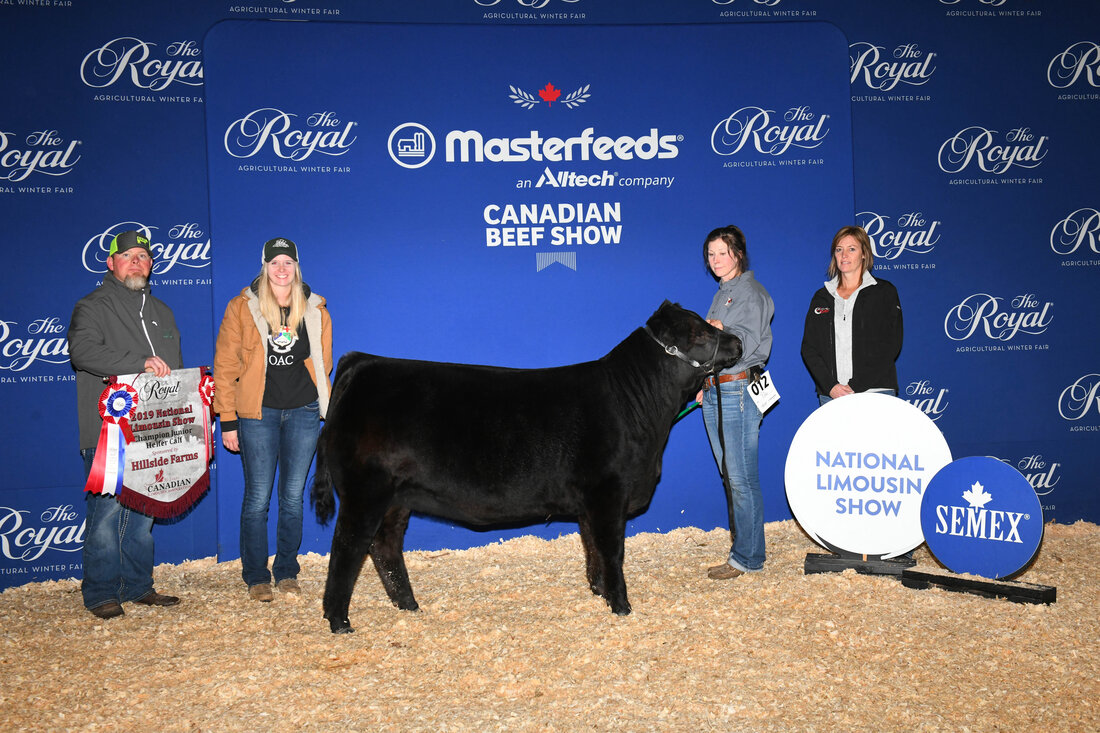 We were pleased to receive Banners for Champion Bull Calf and Pair of Bulls.  Our 4 heifers all placed well too! 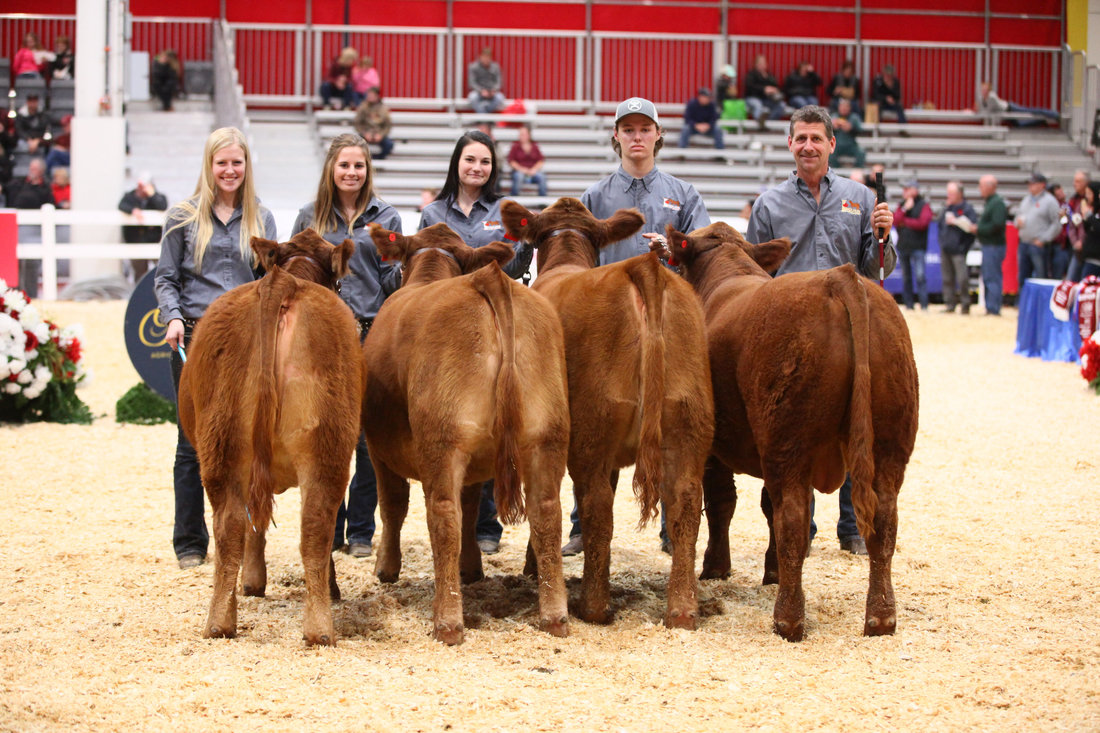 Thank you to the girls from Nova Scotia and Matt Meuser from Saugeen Shores for their help in the ring!

We are very excited to announce that After Hours Ella REW 129E was awarded Reserve Champion Intermediate Heifer Calf!

We're getting ready for the 2017 Royal Winter Fair!

These are the lucky contestants that will be travelling to the big city for six days in November! 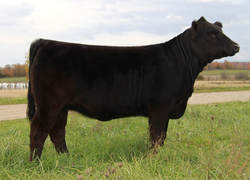 Just home from a great week at the 2016 Royal Winter Fair!

All the animals we took were 2016 calves and sired by our herd sire, Bee Zee Adrenaline.
We were pleased to bring home the Junior Get of Sire Award!

Click for info on bulls and semen for sale
​

Many thanks to all purchasers of our yearling bulls & heifers!

​Like what you see?  There's more where these came from!  Give us a call!

After Hours Limousins was proud to participate in National Limousin Show at the 2015 Royal Winter Fair. 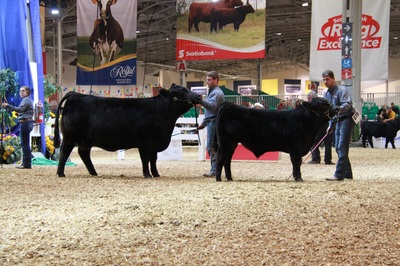 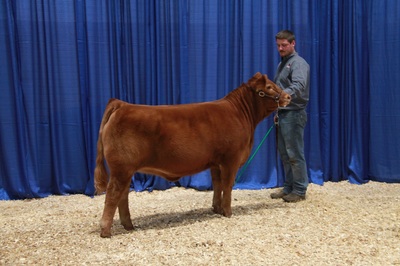 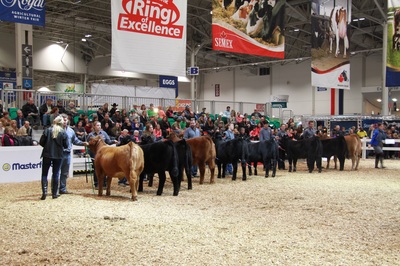 June 2015 - Congratulations and many thanks to Brian Legge of Chesley  for purchasing one of our yearling bulls - ﻿After Hours Big & Rich! ﻿
This black bull is the offspring of our long time herd dam After Hours (Outbreak) Nala and sired by Paynes Derby.  He's turned out to be a very well muscled bull and  will work out well and produce some great offspring for Brian's herd!

June 2015 - Congratulations and many thanks to James Goodacre of Wolseley for purchasing one of our yearling bulls - ﻿After Hours Betcha Can! ﻿
This black bull had a great birth and weaning weight, is clean through the front end and shoulders and will prove to be an easy calver for Jame's commercial cow herd!

Congratulations and many thanks to the new owners of our Royal Winter Fair Elite Sale heifers:

After Hours Limousins participated in 2014 Royal Winter Fair.  Our showstring consisted of the above two heifer sold as well as the four below. 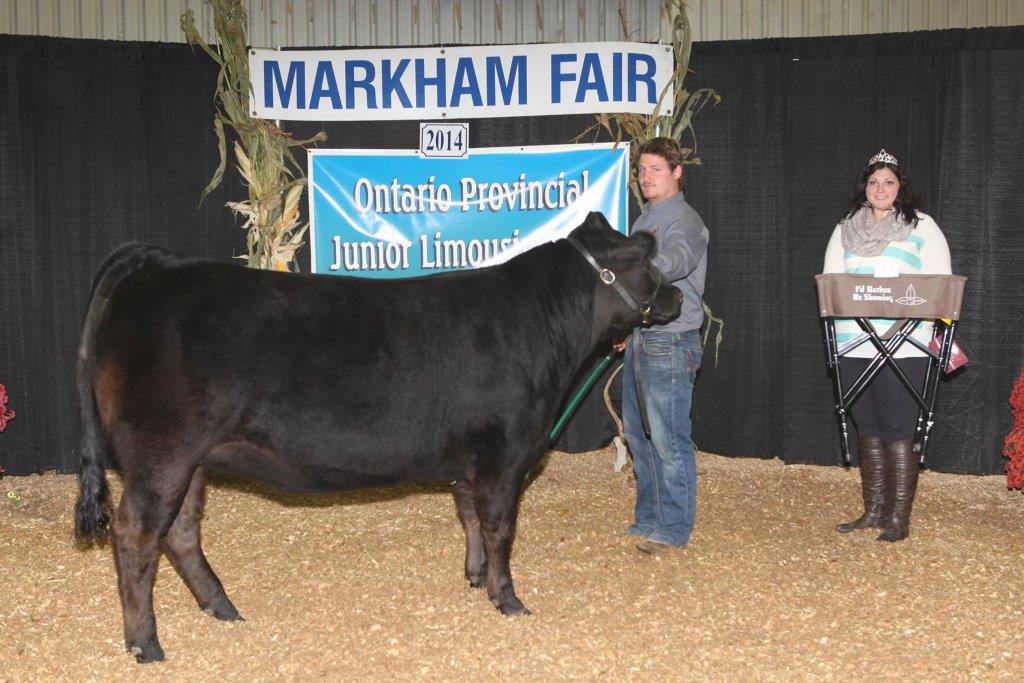 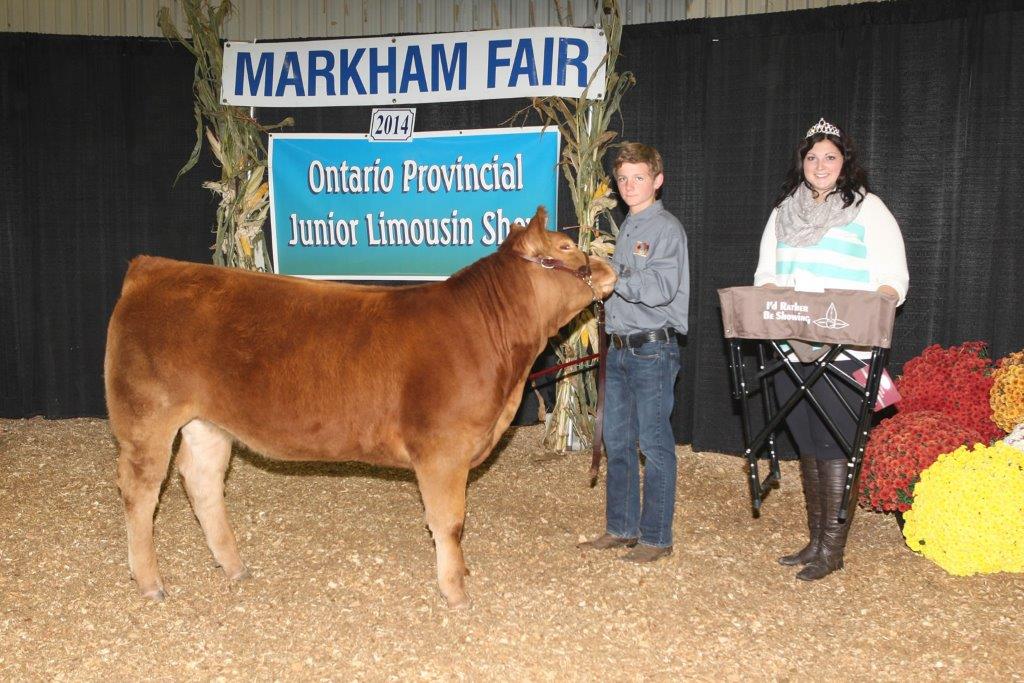 May 2014﻿ - Congratulations and many thanks to David Brownridge of Shelburne for purchasing one of our yearling bulls - ﻿After Hours Antonio! ﻿
This black bull was at the shows last fall and has proven his service this spring to some heifers in our own herd.   We're sure he will work out well and produce some great crossbreds with David's angus cows!

﻿April 2014﻿ - Congratulations and many thanks to ﻿Allen & Lynne Lowe of Flesherton﻿ for purchasing one of our yearling bulls - ﻿After Hours UC At The Top! ﻿  (pictured in herd lineup - males)
This embryo purchased at Edwards Limousins in Missouri is out of their lead donor, Mags Scandal and the powerful Wulf's Urban Cowboy.  We're sure he will be produce some amazing offspring for your 2015 calf crop!

﻿April 2014﻿ - Congratulations and many thanks to ﻿﻿﻿Ashleigh Lowe of Flesherton﻿﻿﻿ for purchasing one of our yearling  heifers - ﻿After Hours UC Adelaide! ﻿
This  heifer was a 4-H calf last year and shown at numerous local fairs.  She sells open and Ashleigh plans to AI her this spring.  She's out of Airlie Wonderwall and is sired by Wulf's Urban Cowboy. 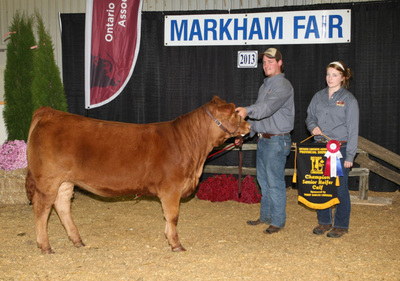 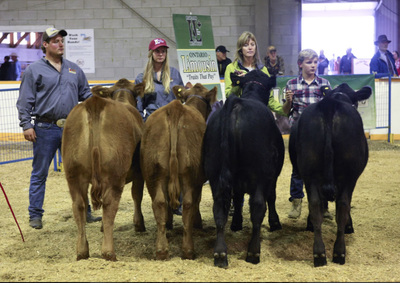 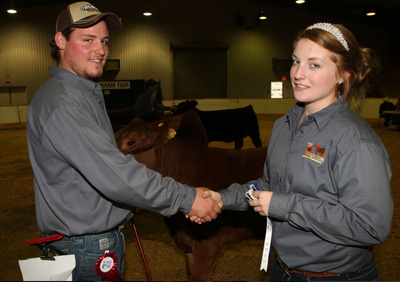 Quite an experience for the cattle in downtown Toronto!  We spent 6 days at the Royal Winter Fair.  All three kids participated in the Junior Limousin Show as well as our breed show.  Tyson and Braeden also both participated in the 4-H Junior Beef Heifer Show.  After Hours Arizona was Reserve Senior Calf Champion and Pinnacle Zina took Reserve Senior Yearling Champion, both in the Limousin Breed Class. 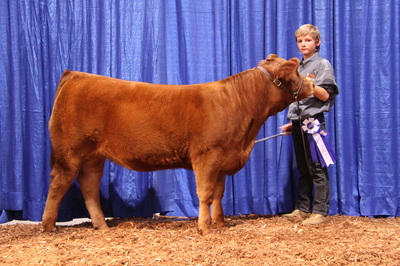 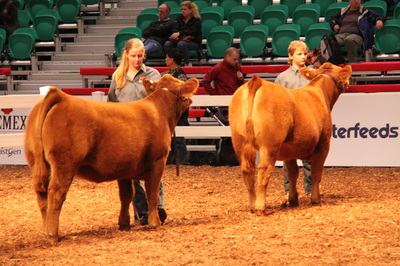 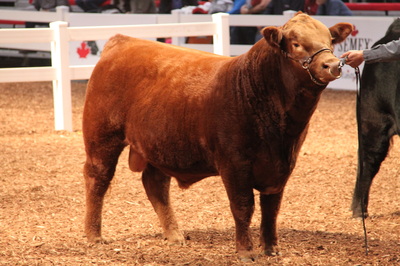 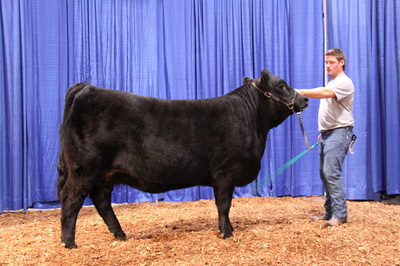 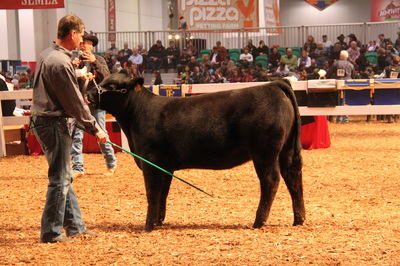 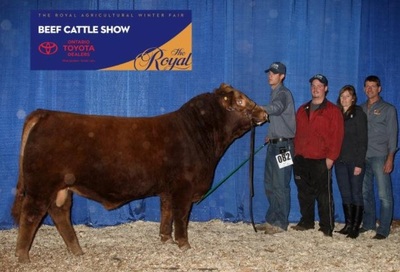